Magical Coincidences in the Flower of Life

So in September of 2009, I was at Symbiosis Gathering and I found a necklace in the dirt at the Shrine stage. It looked like this: 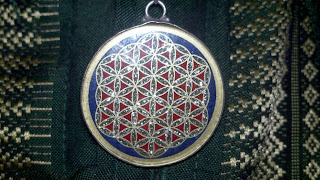 I knew this was a magical piece of jewelry right away. I put it on a string and started wearing it around the festival hoping that I would run into whoever lost it so I could return it to its owner. Well, no one claimed it. I thought about giving it to the lost and found, but figured then someone from the lost and found would keep it or it would sit in a box forever. So I kept it and I wore it as much as I could especially when I went to festivals or events similar to the vibe of Symbiosis. I kept the intention that I would one day run into whoever lost it and I wore it everyday all over Europe on the Pleasant Revolution Bicycle Music Tour.
Fast forward to December 21, 2010. Winter solstice with a concurrent lunar eclipse. I'm playing at Heart Tribe's Crystal Download event at the Temple of Visions Gallery in Los Angeles.  This guy: 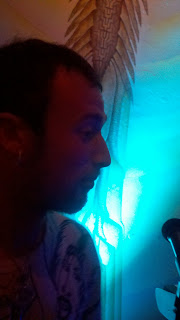 David Block aka The Human Experience sees the necklace and asks, "Hey, where did you get that necklace?"
"I found it on the ground at Symbiosis last year," I reply.
"I lost that necklace there last year," he replies. "It's from Rajasthan, Northern India."

"Well, here you go," I say. "I've been keeping it safe for you." And I hand him the necklace.
He in turn puts it around my neck and says, "Thanks. Now I can give it to you to hold onto for a while again."
So I'm still wearing it.
These kinds of magical coincidences are happening all the time. We just need to be present enough to observe them and keep our intentions on manifesting them. We are magical musicians and musical magicians.
Posted by Cello Joe at 1:47 AM 2 comments:

I met KRS-1 on the Queen Mary 2 cruise ship on the voyage from Southampton, England to New York City Nov 10 2010 to Nov 16 2010. He never flies so when he goes on tour in Europe, he takes a boat....like the pleasant revolution did. Hopefully, we'll collaborate on some music! 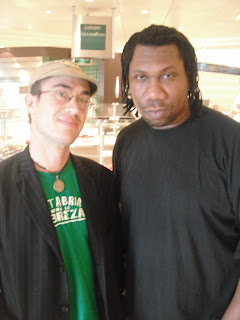