Lightning in a Bottle Recap Video by Mario Covics

Such a beautiful amazing time.. hopefully this video will help you understand how much awesomeness went down...
Posted by Cello Joe at 2:19 AM No comments: 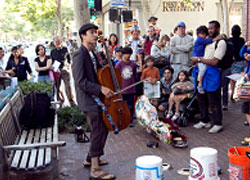 Palo Alto World Music Day
I played at this event two years ago and it was a blast!
I had 40 people singing along to my songs on the street in Palo Alto!
Really, you gotta come check this event out because there's over 50 acts all over downtown Palo Alto!
Check out the schedule: http://www.pamusicday.org/program.html
Serious fun!
I'll be performing from 3pm to 4:30 pm at 400 University Ave (@ Waverly St, in front of Union Bank)
Here's a picture of me playing at PA World Music Day in 2009!

This show is not to be missed!
RSVP and invite friends on FB: http://on.fb.me/cellomagic
Buy advance tickets: http://cellomagic.eventbrite.com
Cello Magic:
The Cello Madness Congress!
$5-20 sliding scale
doors open at 7:30  pm
========================================
The last cello Madness Congress was standing room only at Eth-Noh-Tec Kinetic story theater! We played the first movement of the USA premier of an original composition for 8 cellists by composer Ian Stewart from London as well as a cello octet featuring MC Kirby Dominant by composer Joowan Kim from Oakland, CA.
It was magical at the Cello Madness Congress on April 9th 2011.
a link to a short segment of Danielle Lottridge doing a bellydance:
http://youtu.be/psLGySceDRg
a link to a short segment: mumbles raps fast at the april cello madness congress
http://youtu.be/4k5zzJdo9mU
On Sunday June 19 2011, we will meet again.
Sam Bass and the Sambassadors. That's right, the Sam Bass from Loop!Station and Les Claypool Band.
http://www.youtube.com/watch?v=8IlvlOYLrGQ&feature=related
Sebastian Plano will be performing a few pieces from his new CD for cello quartet and electronics.
http://www.sebastianplano.com/
Rushad Eggelston (Tornado Rider, Wild Band of Snee, Fiddlers 4, Crooked Still) is going to throw down like nobody's business!
http://www.tornadoriderband.com/fr_home.cfm
Who knows what kind of magic will happen, but you had better cellhttp://cellomagic.eventbrite.com if you want to be able to get a seat...or stand. There's only 75 tickets available. Tickets are $5 to $20 sliding scale, so if you're doing alright, support the art.

Viracocha says,
"Viracocha info: We are a community run underground venue and so we ask folks to help protect the space from being shut down. Please; No outside alcohol, be mindful of noise and gathering outside, no drinks upstairs and also please be respectful of the items in the store. Thanks so much"

I will be entertaining at the MAPS art gallery at the Cannibis Exhibition. If you wanna come, please call me for more info on this event.. I don't have all the details yet..

Recap: I made it to the festival.. I didn't end up riding the whole way.. I took a train from Salinas to Santa Barbara and then Santa Barbara to Santa Ana and rode the 15 miles to the festival. Too much weight and too far to go in too short of a time. But I got there on time!
LIB was quite possibly the coolest festival I have been to ever. So much art, so much love!
I had a blast and sold out of Get Loopy and Live @ Fusion Festival CDs. I guess it would have been smart to bring more CDs..so much weight though...Lots of people came up and told me they enjoyed the music I was making so I must have been doing something right!
Some photos i took

I got invited by Lucent Dossier Experience to perform in theBahamas at the Atlantis Resort for 4th of July. What? Craziness! I'm so excited!
I'll be returning to the Oregon Country Fair July 8-10! Yippee!
I'm playing at the San Ramon Farmer's Market July 30th.
Also, I'll be appearing at the California Academy of Sciences in Golden Gate Park at their "Local Bites" event on July 31.
That's all for now!
Lot's more later...check out CelloJoe.com for upcoming shows.
-Joey
Posted by Cello Joe at 1:27 AM No comments: