The Pleasant Revolution documentary movie "Stuck on Earth: Where No Band Has Gone Before" has surpassed our goal of raising $20,000. Our kickstarter project has been a success and will be funded on September 25!

Sergio Morkin & team are going to finish the movie and it will be entered into all kinds of film festivals! There's still four days to chip in some cash for the project to have extra money so they don't have to cut corners to get the movie done!

If you like the idea of a documentary movie about a band riding 5,000 miles over seven months and bicycling without a support vehicle all over California and Mexico with a pedal powered sound system and you haven't donated, you still can. This documentary will inspire people to live their dreams, to dream big, to enjoy the journey and to ride bikes! So chip in what you are able!

Mil gracias, a million thanks to all the 329 backers of the project. Average pledge: about $60! It's amazing what we can do when we join together and get behind the projects we want to see done in the world.

What are your amazing kickstarter ideas that you want to get crowd-funded? Improving water systems where they are desperately needed? Starting a humanure company? Manufacturing coats that convert into sleeping bags for the homeless? Starting a permaculture healing center? It's all about the idea nowadays in this internet information world we live in. Dream big and then make your dreams reality with a little help from your friends!

Now it's time to celebrate! 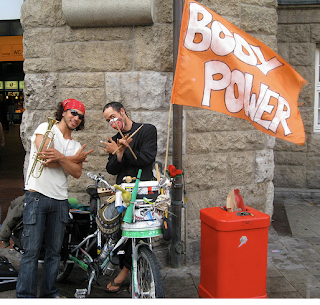 Oh and check out these videos i made at Burning Man. Sorry for the low volume on the sound.

You can download this two hour long mp3 of a live show I played at Caffe Trieste in Berkeley. There was a great crowd there and I didn't know how they had heard about the show. One person mentioned the Johnny FunCheap email list which has helped the Cello Madness Congress in the past.