CelloJoe will be opening for Lucent Dossier Experience on October 21 & 22 2011 at
The Palace Theatre
Los Angeles, CA! 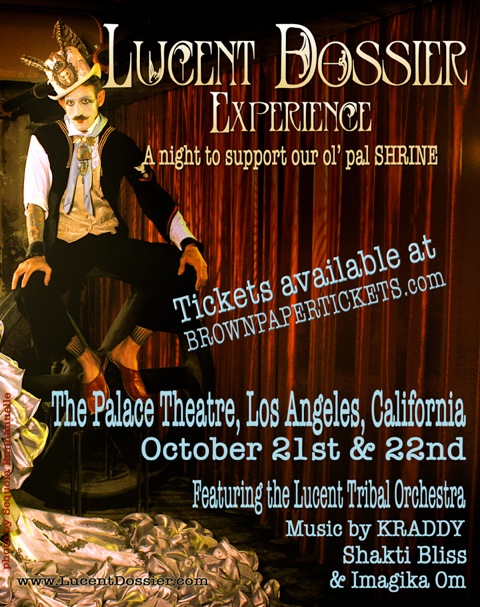 So I have a show in Santa Cruz this weekend on Saturday. Also, check out these videos of my set at Decompression at Burning Man! Check out the fabulous coat I got from WildOnTheInside.com!

Get freaky, Get Funky

Time to Rise Above...

Beat Bach (Variations on a theme by J.S. Bach)

$5-20 sliding scale
doors open at 7:30 pm
tickets at http://cellounicorns.eventbrite.com/
*ADRESS BELOW*
The last cello Madness Congress was Sunday September 11 2011. We featured Devon McClive doing cello looping and vocals. Rushad Eggleston made a surprise appearance and wowed the crowd as usual with wild antics. Jonah Kai, Evan Fraser, and CelloJoe performed a Shamanic Sound Ceremony complete with Masha doing a fish birth dance and Dunce rapping. Sebastian Plano played Bandeon with cello accompaniment and played cello with electronics. Finally we had Eric doing electronic effects cello as "filthmilk." What will we have next month? You'll have to come see for yourself!
The next Cello Madness Congress is called Cello Orgy and we'll be convening to get it on on Sunday October 9, 2011 at 7:30 pm (doors.) Show at 8 pm.
::::::::::::::::::::
:::FEATURING:::
::::::::::::::::::::
The Family Crest
www.thefamilycrest.net
The Family Crest began as a collaborative recording project in 2008 with a vision to change the way music is made. Gathering friends, fans, musicians, and non-musicians alike, the group began to record songs in bars, churches, streets, and other unconventional locations. Their collaborative approach quickly grew steam, evolving into a seven-piece orchestral indie rock band with over 100 ‘Extended Family Members’ participating in recordings, live performances, and media projects.
The Family Crest’s debut EP, Songs from the Valley Below, and live performances have created a buzz within the Bay Area, drawing acclaim from the blogosphere, radio waves, and journalists. Highlights include sold-out performances at favorite Bay Area venues including Fox Theater Oakland, Cafe Du Nord, and Bottom of the Hill.

Rebecca Roundman
http://dirtycello.com/
http://rebeccaroudman.com/
A heavy hitter in the bay area who has played with Carlos Santana to Isaac Hayes. Check out her website.

~Cello Joe~
*see it to believe it, friends:
http://www.cellojoe.com/

You ought to buy a ticket in advance if you want to be able to get a seat. There's only 75 tickets available. Tickets are $5 to $20 sliding scale, so if you're doing alright, support the art.
Viracocha says, "Viracocha info: We are a community run underground venue and so we ask folks to help protect the space from being shut down. Please; No outside alcohol, be mindful of noise and gathering outside, no drinks upstairs and also please be respectful of the items in the store. Thanks so much"
A bit of background:The Cello Madness Congress is a loose knit group of cellists from around the bay area (70 members strong and growing!) who get together to write a new constitution of what is possible with the violincello or 'cello for short.
We play the instrument said to be most like the human voice and we create spontaneous, improvised, magical musical moments of pure ecstasy (the aural/auditory kind) that astound and amaze the listener's ear. We can go from a stately, majestic promenade of elf gods to a wild, erratic, frantic frenzy of whirling space gnomes dancing in eternity whilst seducing seahorses and sea cucumbers.
Our jams can depict the ephemeral wisps of smoke rising from a funeral pyre to the prismatic rainbow colored fanfare of a three ring circus complete with elephants and clowns.
We also read music arranged for cello. We invite all cellists to come and explore with us. Other instruments are welcome too, especially violin, viola, and upright bass.
Come and experience the magic for yourself! We meet in the San Francisco Bay Area, the Cello Bazar is at the Bazaar Cafe in San Francisco and soon we'll be taking over the world.We can be hired for parties, corporate events, weddings, bar mitzvahs, in home concerts, festivals, churches, retirement homes, grand openings, circuses, etc.
:::VENUE INFO:::
998 Valencia St
(between Liberty St & 21st St)
San Francisco, CA 94110
Neighborhood: Mission
(415) 374-7048
www.viracochasf.com/
Posted by Cello Joe at 9:28 AM No comments: