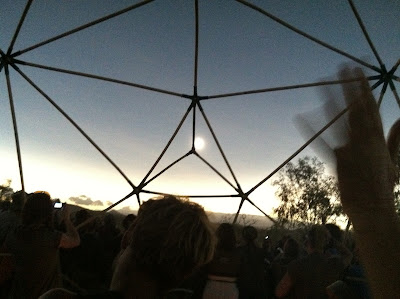 total solar eclipse.
It's funny. I came half way around the world for this two minute spectacle and it was worth it a million times over. It is definitely one of the most powerful experiences I have ever had and I will remember it forever.

This will be my first long form update from the road. I'll include some pictures and videos and written musings.

It's funny how when you go to another country, you notice all the small differences. Different toilet designs and manufacturers. Showers in the public restroom at the Cairns airport. (That was definitely a very appreciated shower after nearly 23 hours of traveling!) People speak in a unique Australian manner. There are 'heaps' of new phrases to learn and pick up on, but 'no worries.' It's 'too easy.' I 'reckon' by the time I leave this country in two and a half months time, I'll have the colloquial lingo down pat. It seems that people here just shorten everything. "Pass the tom." is short for "pass the tomato sauce" Peoples' names because half as long. Red heads are nicknamed "Ranga" (short for orangutan.) 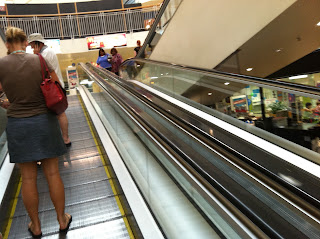 They have escalators that are ramps so you can take carts on them. Who'd have thought? Australians I guess.

The Australian character seems very industrious and hardworking. People are so friendly, polite and helpful. Maybe it's the hybridized British accent.

I got to Cairns with all 80 kilos of my gear pretty easily. San Francisco to Sydney to Brisbane to Cairns. It was a lot of traveling and a lot of gear to drag around. Luckily I was able to use carts everywhere. 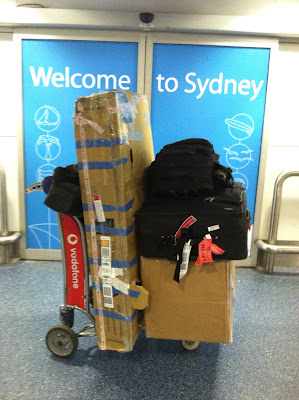 wow. that's a lot of stuff.

I stayed with a guy I met on CouchSurfing named Nevan. He was such a gracious host and we had fun talking and hanging out. I played a mini concert in his living room for some of his friends, Patti & Josh and his dad John. It was great fun. Thanks Nevan! Really appreciate the help.

It took me a few hours the next day to assemble my trusty steed Krendara (my bicycle.) Then I caught a bus into town to get online and take care of some internet business. While in Cairns I went to the Telstra shop and got a mobile phone for my time here in Australia. Pretty essential gear for getting in touch with venues, couchsurfing hosts, and directions. I stopped at a pub and was drinking a beer when I overheard a guy saying he was stage managing the Earth Stage at Eclipse. The whole place was full of festival type people with dreads and tattoos and funky clothes. So I said, "Hey I'm playing on that stage!" His name is Craig and we chatted about the synchronicity of meeting then and there. "See ya at the fest!" Craig said as he hurried off to some party.

So the next morning, Friday Nov 9 2012, I loaded up my bicycle with all of my stuff for the first time as I had packed the day I was leaving San Fran and had never actually put all the stuff on Krendara before. Pedal Powered Speaker, collapsible cello, two bags of gear full of camping gear, music equipment, a few outfits of clothes, and a backpack full of odds and ends. 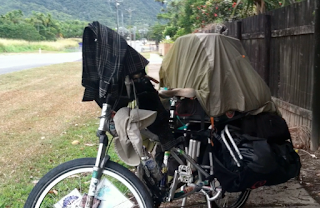 not the best photo.. but I forgot to take a pic of it.. will do soon.

I rode the short distance from Kewarra Beach to Smithfield to meet Chloe and Dre who Dan from Coco Poco Loco (a burning man connection through Ashram Galactica) had arranged for me to get a ride up to Eclipse in their rented RV. They had had quite a time getting from the airport to Smithfield. Apparently Dre had clipped a shade structure in a carpark and nearly upended the RV! I hung out at the shops at Smithfield and met them there when they got there a few hours later. We did a supply run and we were off.

The site of the Eclipse Festival was called Maitland Downs and was a gold mind, but is now a cattle station. It was way out in the middle of nowhere. I met a girl named Una who had cycled there and she said there wasn't any water for 70 km. She had had to flag down a car and ask for water. Good thing I had decided to hitch a ride to the festival. The weather was so hot!

I was scheduled to play on the Earth Stage at 6:30 pm on Thursday Nov 15. I found out at 1 pm on Monday Nov 12 that my set time had been switched to 2 pm on Monday Nov 12. Luckily I found out this information right after I had just played a short set at the Reggae Cafe (a small renegade stage/cafe) so I had all my gear right there and I just shuttled it over on my bicycle to the stage. It went great and there were actually a lot of people that came over to check out the strange cello beatboxing music (probably a first for Australia I imagine) despite the afternoon heat. There were misters set up under the shade canopy. Many booties shaking and I sold a few CDs to boot. 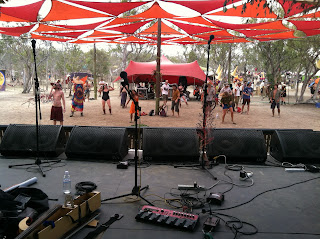 view from the Earth Stage

I rocked out pretty consistently and steadily every day. As much as I could, I got out there and played in between the stages on my own mini renegade sound system. People were digging it! They were pedaling to power the speaker and tipping and offering compliments and getting CDs. I also went around and saw some really world class talented DJs and bands. The full lineup is at Eclipse2012.com.

I also played at the Cosmic Alignment Gallery which was one of my favorite places in the whole festival. It featured the art of Alex and Allyson Grey, Autumn Sky, Amanda Sage, Luke Brown, Chris Dyer, Android Jones, and more. Here's just a few of the pieces: 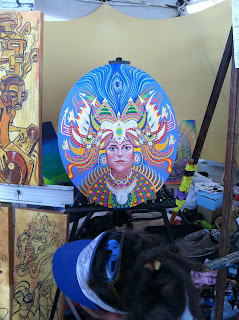 Chris Dyer painted this during the festival. 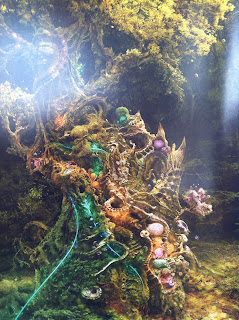 I unfortunately do not know who did this, but it's awesome! 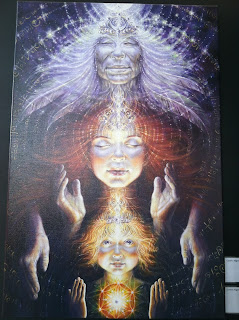 Autumn Skye
Wednesday at 6:30 AM or so was the Eclipse. SO AMAZING. It was morning and the sun was climbing higher. All of a sudden the light changed to an eerie twilight and I saw the corona of the sun behind the moon as it darkened the whole sky. Really there is no way to explain how magical it was. You had to be there..

On Thursday I was told by Schuddy to check in with the Earth Stage because they might be able to get me on at my assigned slot by shuffling the inter-act DJs a bit. So I got to play on the Earth Stage again! Stoked. Lo and behold, during my sound check, my G string breaks. Imagine my embare-ass-ment! No seriously the G string on my cello broke and I didn't have my extra strings with my cello; they were back at camp. Talk about a bonehead maneuver! You'd think I'd have the sense to keep my extra strings with my cello, but somehow they got separated in all the packing and shuffling and moving around. I was on right then and I didn't have time to go back to camp to get the extra string. So what did I do? I just said, "The show must go on. I'll play with three strings." I proceeded to rock out for 45 minutes with only three strings. And amazingly, I was able to pull it off. A bunch of people came up after and wanted to get a CD and congratulated me on a good show. Who'd have thought? It was an interesting mental exercise to transpose songs so I could do them without a G string. I was playing at 75%, but the show was a ten out of ten in my book!

Well I am racking up a huge charge for my hours on the internet at this expensive as hell internet cafe in Kuranda, Queensland, Australia. I have so much more to post such as videos, and pictures, etc, but I'll have to do it another time. I have to get back to Speewah where I'm staying with the band 8 Foot Felix. We're playing at a party in Kuranda and I have to hitch a ride back to grab my stuff and head to the party.