I hurt my back slightly dancing at the naked disco at La Toosh at Pete's Ridge Festival busting some break dance moves without warming up enough and then when I was coming back from Fest La Frog on French Island I was unloading gear off the ferry and tweeked my back. I've been talking long hot baths for the last week and I thought I was getting better so I rode the 3 km to the gig at 303 last night (which was awesome!) but when I woke up this morning my back was worse than it was a week ago.

I got an hour long sports massage today and am just praying that I can make it through the gig tomorrow and the next week at Rainbow Serpent Festival.

The show must go on!

Tomorrow night is at the Bendigo Hotel in Collingwood (125 Johnston Street Collingwood VIC 3066 (03) 9417 3415) and it's with balkan klezmer experts The Underscore Orkestra and hot club jazz band Ultrafox. 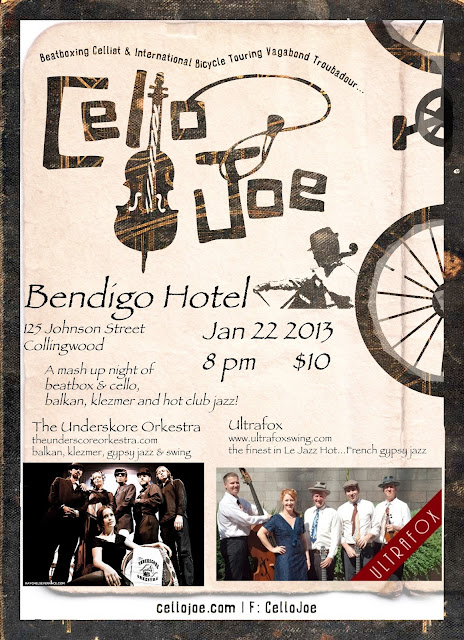 BTW, not meaning to crack on to you, but seeing as you have a song aboutperving on cyclists that is as equally heternormative as this one, youmight be amused by these lyrics if you've not come across them before. Mychoir sing them:http://www.ecopella.org/twowheeltango.htm

I think those lyrics are hilarious!