Wow..How the time flies. I can't believe it's been over a month since I posted on this blog.. I have been microblogging on twitter with pictures and updating my Facebook page (FaceBook.com/CelloJoe) Please let me know that you're reading this blog by posting comments or emailing me! 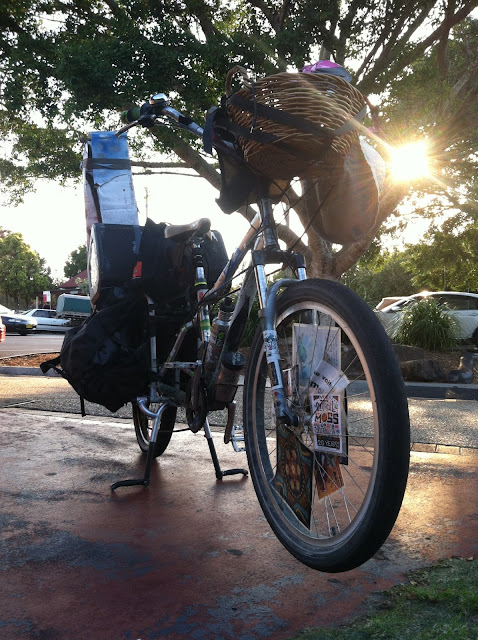 Traveling solo by bicycle with 150 pounds of music & camping gear + food has been very fun and rewarding and not as difficult as you would think. I took a train up to Newcastle from Sydney and I was pretty much able to push my fully loaded bike into elevators, into trains, off trains everywhere and no body said, "Hey, you can't take that crazy overloaded bike on the train!" Good on ya Australian train personnel!

It has been lonely, but I am always meeting and hanging out with hella cool interesting people. I just played at Peats Ridge Music, Art, & Sustainability Festival over the new year. I got to see John Butler Trio live which was awesome. I also danced my ass off at the Naked Disco at Latoosh busting various breakdancing moves naked such as a monkey flip and the turtle. I wish I had warmed up and stretched first because I think the monkeyflip through my back out. :(

I ran into Mister Rogers at Peats Ridge. He's from back home in California and we had talked about collaborating months ago. Who knew that we would end up working on some music together at the Graffiti Mansion in Bondi Beach Sydney? I'll be sure to let you know when it's done and share it. It is already sounding really good.

I went to Byron Bay and spent a week with Jake Kemp and friends busking on the streets there. Jake is a beatboxer and goes by Isosceles. We spent a day recording and I have made the tracks available on my BandCamp page: http://cellojoe.bandcamp.com/album/isosceles-cellojoe Give it a listen and tell me what you think! I play cello, Isosceles beatboxes.


I played a show at the Alexandria hotel Dec 19 2012 with Charlie Mgee (Permaculture Songs). Charlie is an awesome dude that plays a ukelele really well and sings songs about permaculture. We used the pedal powered sound system for the whole show! Check out this video he made of the show:


I also went and busked downtown in Sydney on Boxing Day (the day after Christmas is a huge shopping day in Australia and it's called Boxing Day.) I was singing all my anti-consumerism songs while people were massed up like sheep toting their shopping bags from Guicci and Prada and Armani. there were literally lines out the doors of the shops with people waiting in line to get into the stores. I actually made some good tips down there anyway!

I've got heaps of gigs lined up in Melbourne: